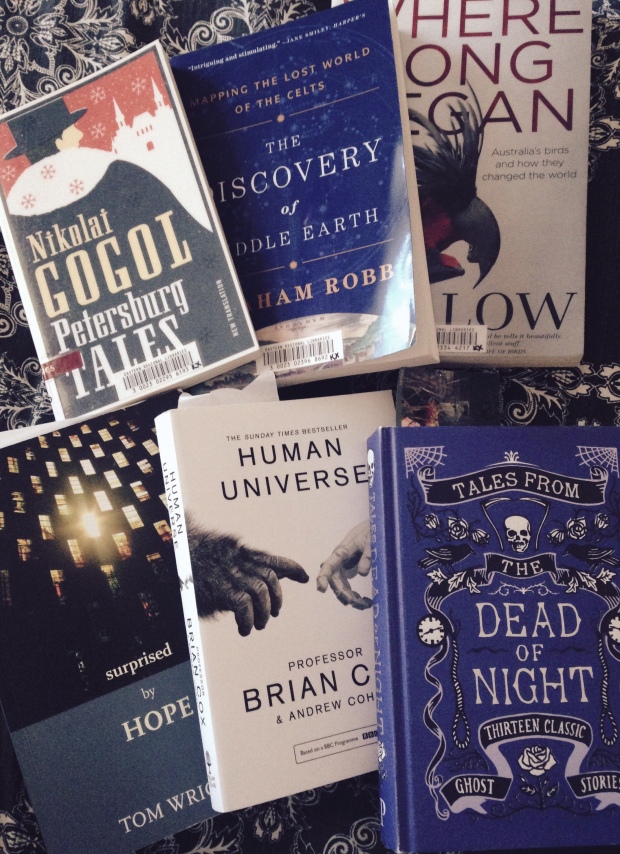 Here are the books currently taking up space in my reading pile. The top three are from the library and I’m yet to make any real progress in them. On the bottom, I’m borrowing a friend’s copy of Surprised By Hope. I bought Human Universe by Professor Brian Cox and Andrew Cohen just recently and so far it’s incredible. Tales from the Dead of Night: Thirteen Classic Ghost Stories, selected by Cecily Gayford, was my birthday present to myself last year and it is fantastic. It includes ghost stories by such authors as E. Nesbit, Ruth Rendell and Rudyard Kipling. This is my third time reading through the collection, many of which come from the late 19th and early 20th Centuries. There is just something about the way late 19th Century writers composed their tales that really draws me in. Without having intended it, I have found that roughly half of my most-favourite books come from Europe in the 19th Century, usually Russia and England, but some from other countries, too.

Hence the fact I picked up the 1830s and 1840s short story collection by Nikolai Vasilievich Gogol (or, if you prefer the Ukrainian translation of his name, Mykola Vasyliovych Hohol). Now, I won’t enter into the debate of his ethnicity or nationality, as those discussions are beyond me. Because my husband is part-Ukrainian I find it interesting learning about Eastern Slavic history, and have found that these old Russian novels are a really interesting insight into the culture. I particularly love the writings of Fyodor Mikhailovich Dostoyevsky – Crime and Punishment and The Brothers Karamazov are novels that were life-changing for me.

So far I haven’t read much of Gogol’s works. I have read some of Dead Souls though I’m fairly certain I never finished that. I have also watched two different film adaptations of his story Viy (Вий), a somewhat terrifying horror story. The 1967 film is said to be quite faithful to the original story, which I haven’t yet read. I also saw the 2014 version at a Russian film festival held at ACMI in Melbourne, Australia. I must’ve been one of five non-Slavic people in the whole audience (the others being a handful of our Anglo-Celt and Anglo-Asian friends – I love our multicultural city!). The 2014 film had rather steam punk vibes about it, and plot-wise had some similarities with the 1967 film, but only loosely so, and was a mix of Russian, Ukrainian and English elements. It also, in my mind, inspired moustache goals that I have since insisted the Husband fulfil. He’s not convinced.

The other two books on the pile, The Discovery of Middle Earth: Mapping the lost world of the Celts by Graham Robb is, as far as I can see, a history of Ancient Gaul and Druidry and the spread of Christianity through ancient Europe. Where Song Began: Australia’s birds and how they changed the world by Tim Low is an evolutionary history of the unique and diverse birdlife of our continent. I look forward to delving into these books.

Low, T. (2014). Where song began: Australia’s birds and how they changed the world. Melbourne, Australia: Penguin.