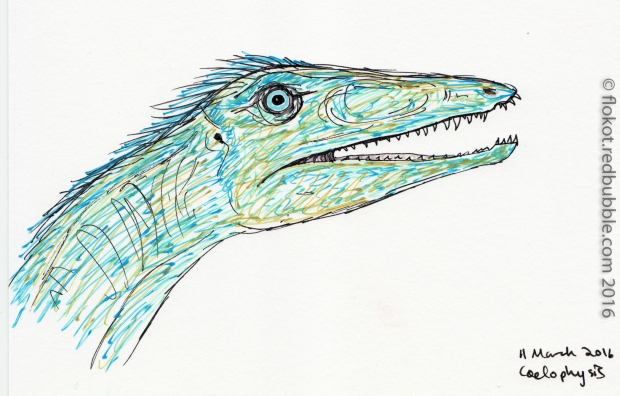 Some speculative sketches of Coelophysis with proto-feathers. I am trying to get up-to-date on where dinosaur palaeontology is at these days, as much of what I learned as a 12-year-old dinosaur nerd is somewhat out of date. No longer are these critters considered the cannibalistic and scaly monsters I knew of as a child! What an exciting time to be alive, though, to observe from my layperson’s distance the evidence for feathered dinosaurs that was, in my childhood dinosaur books, largely speculation.

If you enjoy my blog and like my art, please consider purchasing an item from my online art portfolio, flokot.redbubble.com.

I was raised liberal-progressive Roman Catholic, in a family with a mix of Atheists, Agnostics, Neo-Pagans and, obviously, at least a few other Catholics at varying degrees of commitment. In that context, I never in my life had reason to question the conventional wisdom of evolutionary biology, astronomy and geology. Then I got married.

Interestingly, even though my husband’s immediate family and friends tended to be variants on what I later found out are called Young Earth Creationists (YECs), one day I realised that the church he’s from and that we attended for most of our married life thus far actually holds the view that it’s up to the individual to decide what they believe. They actively present a multiple array of views and say quite explicitly that it’s not up to the church pastors to decide which view is correct (which may come as a shock to outsiders but no, it’s not always about brainwashing the masses). It’s a lot more laid-back as far as Pentecostal communities go.

At the time I was led to believe that if I wanted to be a real Christian I had to take Genesis literally or I was a compromiser. Here I am 14 years later and my husband has increasingly embraced the rational and the scientific to the extent that his views have changed a lot. We met when we were 19 years old, and you’d kind of hope we’d progressed in our faith journey between the ages of 19 and 30-something. In the meantime we’ve also both finished two university degrees each. I’m qualified as a sociologist with a focus on the environment and human societies. He’s got a Master of Engineering degree and is quite the scientist.  We have learned a lot over the years and that includes learning a whole lot more about how science works, what scientists believe, what Christians think scientists believe and so on. After much careful consideration and reflection we reached a point of no longer accepting the YEC viewpoint. It’s not a decision made lightly, knowing full well the kinds of vitriolic criticism, shunning and accusations of backsliding we would possibly face from some church members.

Let me be clear: I have nothing against my creationist friends whatsoever, and if any of them are reading this I hope that my change in opinion will not dismay you and that one day, even if you never change your mind, you’ll understand that I am simply following the information as I best understand it. And aren’t we all?

For a decade my only exposure to science was through the heavily mediated and pre-approved Creationist texts that compiled snippets of journal materials and framed them with Christian apologetics. You have to understand – I was raised in a family of science geeks. We love science. To stop reading it was to throw out who I am. And then, one day about a year ago, I decided I wanted to learn more about feathered dinosaurs. However, for a number of years I only read about dinosaurs in Creationist texts and so I know just about every apologetic imaginable about how to interpret dinosaurs and fit them on Noah’s Ark (take babies, or eggs, and only two of each kind, which might represent family or order level biology and not species-level). I know all of the claimed dinosaurs in the Bible passages (how dare the study notes claim that Leviathan is a mere crocodile when clearly it’s a Kronosaurus!). I know the “real” reasons dinosaurs died out (a post-Flood Ice Age killed off their sluggish cold-blooded selves… even though evidence suggests that dinosaurs were warm-blooded, and that some of these were furry or feathered). And feathered dinosaurs are either a hoax or their own created kind.

But for many myriad reasons, I found myself increasingly dissatisfied with Creationist apologetics. Now, I’m not going to go on about it. I really have no reason to stop Creationists believing what they believe because I have identified as that myself for about a decade and I shared their materials out when I was leading Bible study groups and have read all the best writers in the field and still find useful some of their questions about the origin of life and death, the way the evidence is interpreted and the way it applies to our identity as humans.

I have found some interesting sites for those who want to explore critical assessments of YEC viewpoints. I’ll list them here but I can’t emphasise enough the fact that I’m not interested in a debate. I am so thoroughly burnt out on Christian apologetics. It feels to me these days like a noise, a clanging gong, rather than a path to knowing Christ.

So, for those who are interested, here are some sites I found that explore issues of Creationism and science. And as always, links are shown here for interest’s sake, and inclusion in my blog is not necessarily indicative of my complete acceptance of the materials presented on the linked site. *deletes half of my original post*

While I have not experienced any of the extreme forms of religious abuse and violence sadly faced by many people, I found myself reading up on these issues partly because I studied Sociology of Cults as part of my uni degree and found it compelling; and secondly because I have experienced or encountered the low-level forms of cultic control that go on; including psychological manipulation, control, disempowerment, financial abuse, forced “volunteering,” a loss of control over one’s schedule, shunning, fundamentalist ideology fuelled by fear, complementarian perspectives on women, punitive and harsh disciplinarian systems of child rearing (for examples of these see here and here), dysfunctional and unhealthy social dynamics, gossip as a means of keeping people under control, a fear of science and psychology, etc. I read about it to try to understand it sociologically, and to share what I learn with those who might need to hear that what they’re experiencing in God’s name is a very human phenomenon and not in any way representative of that which is good and pure and lovely and perfect in the Universe.

Here are some materials that I’ve read recently on the topic. Proceed with caution if you are likely to be triggered by articles referring to abuse, control and religion. 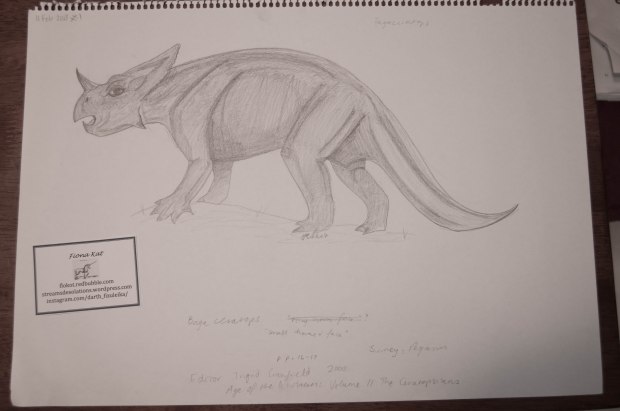 This is a 2008 sketch in graphite of the Mongolian dinosaur genus Bagaceratops. As observers of my drawings may notice, dinosaurs have formed a perennial theme for me. I absolutely love drawing their unique forms, studying books about them, learning about their fascinating history and generally being an all-round dino geek. It’s an obsession I have had since the age of 12 and now I’m in my early 30s* (when did that happen?!) I still can’t shake the need to return to the dinosaurian and pterosaurian themes in my art. 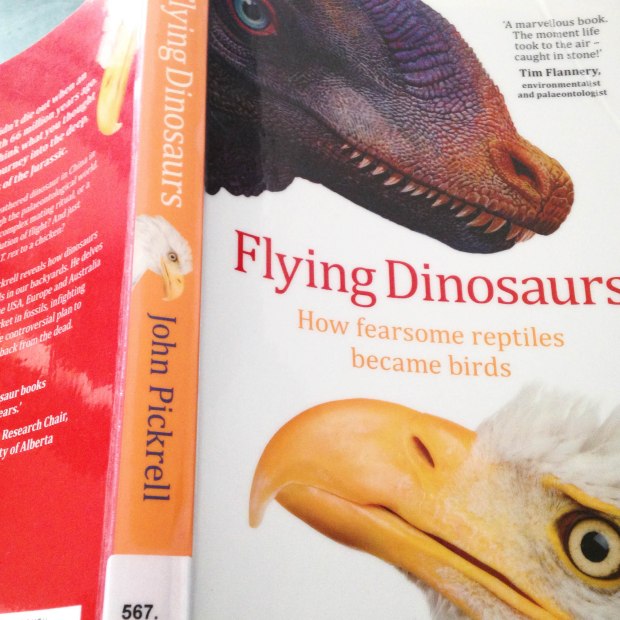 Flying Dinosaurs: How fearsome reptiles became birds by John Pickrell. This fascinating book by the editor of Australian Geographic is a surprisingly entertaining and informative summary of the various research into the similarities between theropod dinosaurs and birds. I spent most of my teen years as a dinosaur nerd, but for various reasons set it aside. In the last year I’ve started reading up on the topic again and am utterly dumbfounded by the sheer volume of research that’s gone on in the meantime. I’ve discovered that my local library has a brilliant selection of recently published dinosaur books for adults, not just kids, and I look forward to reading my way through the collection!