(…and the sound of one of the neighbours’ dogs howling… ugh… people, please: if you can’t give a dog the attention he or she needs to be psychologically healthy, maybe you ought to not have a dog. Keeping a highly sociable pet – evolved from a species that forms close bonds with its pack – locked up on its own for several hours every day is not good for them, and a nightly 15 minute walk isn’t going to do much to alleviate its stress.)

Anyway, animal welfare rant aside (though if you want more on that sort of thing, here’s an article I read today that I liked), I am on the home stretch and I don’t want to give into the temptation to procrastinate writing by getting caught up blogging. I can picture a hare/tortoise scenario in which I am the overconfident hare that stops to take a quick nap – only to find I lose the race.

Here’s a screenshot showing my current progress, before I begin working on my writing for Day 22. My NaNo experience this year has been, by far, my most successful. I have followed a number of different techniques and ideas while writing in comparison to previous years. After November I will (hopefully) write a retrospective piece on why NaNoWriMo 2016 was my best year so far.

NaNoWriMo 2016 progress screenshot, at the beginning of Day 22. [Source]

It’s already November 2 here in Melbourne, Australia, which means it’s day 2 of NaNoWriMo. Here’s a little recap on how Day 1 panned out.

Day 1 coincided with a public holiday, the Melbourne Cup (a two-mile / 3200 m Thoroughbred horse race held on the first Tuesday of November every year since 1861) but since I started learning about the animal welfare issues surrounding racing in Australia I don’t really follow it anymore. I used to be obsessed with horse racing, but these days my conscience nags at me to the extent I laid it aside. Instead, we took the opportunity to finally get around to watching the Formula 1 Mexican Grand Prix – and wow, what a dramatic race that was!

END_OF_DOCUMENT_TOKEN_TO_BE_REPLACED

It’s a beautifully sunny spring day in Melbourne, Australia today. I am looking forward to November and starting my fourth NaNoWriMo, but in the meantime I am trying to stock up my RedBubble store!

After several false starts this morning, I managed to draw a blue horse using Medi Bang Paint and my Wacom Intuos tablet.

At the time of publishing this post, I have made this image available for sale on a variety of RedBubble products including clothing, phone and laptop covers, pencil cases, notebooks, bed linen and art prints. See flokot.redbubble.com for more details.

October 2016. Screenshot of my blue horse on a RedBubble t-shirt. flokot.redbubble.com

I didn’t manage to catch the Inktober train this year but I have been drawing regularly prior to NaNoWriMo. I want to get as much drawing out of my system as I can, before I disappear into the realm of words for a whole month.

Here are some of today’s efforts so far!

The reference picture in the bottom right corner is from Wikipedia’s Velociraptor mongoliensis page.

I also finally got around to making a header picture to emblazon the top of my RedBubble portfolio. After several false starts, I settle for a pink, purple and blue unicorn galloping through space. I think that this, more than anything else that I attempted, best summarises the type of art I have in my portfolio!

I’m binge-drawing before NaNoWriMo begins. I drew this cat in MediBang Paint Pro, using a Wacom Intuos. I still feel like a complete beginner in digital drawing. I like how clean it is, though, in the sense that when I upload files there are no mysterious bits of pixelated fluff, as there often is when I scan my hand drawn art!

At the time of publishing this blog post, this drawing is currently available for purchase on stickers, art prints, and a variety of other products. For more information see my RedBubble portfolio at flokot.redbubble.com. 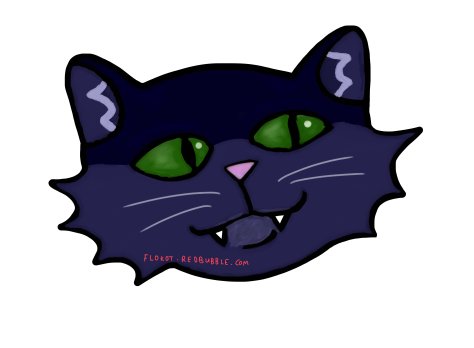 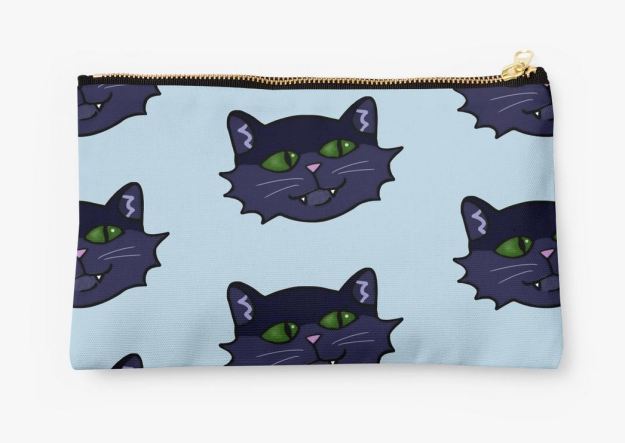 My cat drawing in the form of a RedBubble studio pouch (a polyester pencil case available in small and large sizes).